skip to main | skip to sidebar

A true discourse Declaring the damnable life and death of one Stubbe Peeter, 1590 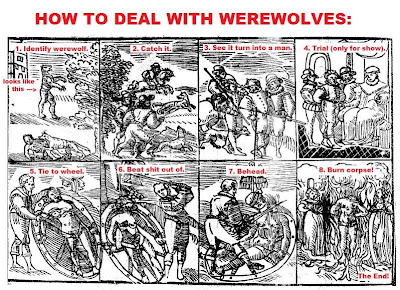 The full title: A true discourse. Declaring the damnable life and death of one Stubbe Peeter, a most wicked sorcerer who in the likenes of a woolfe, committed many murders, continuing this diuelish practise 25. yeeres, killing and deuouring men, woomen, and children. Who for the same fact was taken and executed the 31. of October last past in the towne of Bedbur neer the cittie of Collin in Germany.

Werewolves were a huge social problem in 16th century Europe. They were everywhere! Germany seemed to be especially afflicted. Apparently, this fellow Peter Stubbe, "careles of saluation, gaue both soule and body to the deuil for euer." Problem was he didn't really want riches or fame. He was a total asshole/serial killer to start with, and he only asked the Devil to make it so that he might "woork his mallice on men, Women, and children, in the shape of some beast, wherby he might liue without dread or danger of life." Long story short, SHABLAM! WEREWOLF! Dude started killing everybody, and "oftentimes the Inhabitants found the Armes & legges of dead Men, Women, and Children, scattered vp and down the feelds." It was the worst.

Anyway, some folks finally see Peter Stubbe and arrest him for suspicious werewolfy-type stuff. Then they tortured him on the rack and surprise surprise! He confessed everything! Werewolves absolutely hate torture, but then the townsfolk killed him (and his daughter and the town gossip, whom he implicated) in a fairly torturous fashion anyway. One point for God. P.S., if you'd like to read more about this fairly famous case, I recommend this article from Early Modern Whale. It's pretty interesting.

Can you honestly say you're "Team Jacob" now? I didn't think so.

(By the way, in the vein of Pride and Predjudice and Zombies, which I read and really liked, I think that Wuthering Heights and Werewolves is an obvious next step. Heathcliff is basically already a werewolf anyway. Someone get on it!)
Posted by Sarah Redmond at 5:04 PM

You may enjoy this article from Book Blog about this trend of supernatural classics mashups. I thought it was funny.

BTW, I enjoy your blog very much, and I tell all my friends about it!

Many of you may know of the Internet phenomenon that is LOLCats. Slightly less of you may know how crazy/awesome early modern woodcut illustrations and frontispieces can be. But what joins these two disparate worlds? Well, it may surprise you to know how popular LOL-ing was in the Renaissance. To wit:
"The large Achilles, on his press'd bed lolling, / From his deep chest laughs out a loud applause; / Cries 'Excellent!'"
--Troilus and Cressida (1.3.163-5)Shakespearean proof you can't refute! Welcome to LOL Manuscripts!
-----------------------------------------
(P.S. I know they aren't all "manuscripts," but LOL Early Modern Printed Materials didn't have the same ring to it. LOLNomenclature! Let it go.)

2 BE, OR NOT 2 BE : DAT IZ TEH QUESHUN:
WHETHR TIS NOBLR IN DA MIND 2 SUFFR
TEH SLINGS AN ARROWS OV OUTRAGEOUS FORTUNE,
OR 2 TAEK ARMS AGAINST SEA OV TROUBLEZ, AN BY OPPOSIN END DEM?
2 DYE: 2 SLEEP;
NO MOAR; AN BY SLEEP 2 SAY WE END
TEH HART-AYKE AN TEH THOUSAND NACHURAL SHOCKZ
DAT FLESH IZ HEIR 2, TIS CONSUMMASHUN
DEVOUTLY 2 BE WISHD. 2 DYE, 2 SLEEP;
2 SLEEP: PERCHANCE 2 DREAM: AY, THARS TEH RUB;
4 IN DAT SLEEP OV DEATH WUT DREAMS CUD COME
WHEN WE HAS SHUFFLD OFF DIS MORTAL COIL,
MUST GIV US PAUSE: THARS TEH RESPECT
DAT MAKEZ CALAMITY OV SO LONG LIFE...

Sarah Redmond
Erstwhile PhD student in Renaissance studies, then I got an MLS. LOL Manuscripts is how I amuse myself as I scour EEBO for research. I'm pretty confident that it will be accepted as my dissertation.